Desires and Conflicts Around Money and Abundance 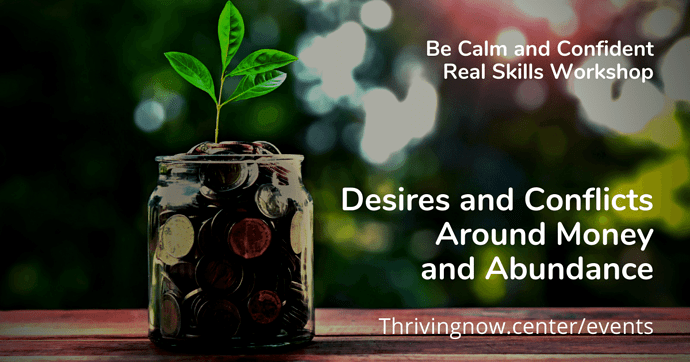 Desires and Conflicts Around Money and Abundance

Money is a trigger for a lot of anxiety and yearning. If we want to Be Calm and Confident around our finances, becoming aware of our inner conflicts is a first step. Then we:

Cathy and Rick worked with volunteers and doing EFT Tapping during this one hour session. It’s part of our new Real Skills Workshops!

We hope you’ll listen, tap along, reply here, and tell a friend! 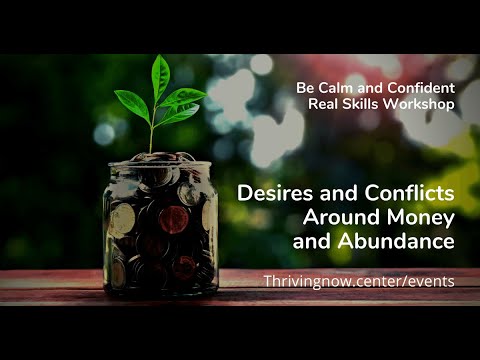 Replay is available (above) and also a computer generated transcript if that is helpful for anyone (below the video player), and @Cathy and I would love to hear what your noticing after the session.

I am noticing I feel a little lighter. I drank so much water during and after the session. There seemed to have been some big shift inside me, but we shall see. That resistance to me making money again seems less. Thank you so much, Rick and Cathy.

What came up for me during the Money & Abundance workshop was a little bit of guilt for feeling from a young age that money and abundance have always flowed to me. It wasn’t until I was in my 30s that it occurred to me that I needed to consciously/gratefully take care of and nurture that flow, ie start budgeting and saving! Another issue that came up for me was betrayal/disappointment after I helped a friend in need with a loan that 7 years later has not been repaid. I’ve learned not to loan money to a friend that I’m not prepared to give as a gift and, importantly not to shut down on being a generous person because I was betrayed.

That resistance to me making money again seems less.

I’m so glad. When we have that kind of derailment (trauma and betrayal and loss) there are usually different emotional aspects and associations our brain makes.

Have you ever written out the “story” of that? I had a HUGE financial loss back when, and even after it wasn’t holding me back in any obvious way, I decided to write it out… include more of the emotional aspects and beliefs I was holding at the time. I read it aloud, tapped while I did, pausing after each sentence to feel, tap, and notice where the intensity level was 0-10.

After 4-5 rounds of doing that, I can honestly say I felt like I had mined through a sixteen ton pile of compost… and discovered a rich wisdom that continues to compound and add value to my life to this day. And those riches were not fear-thoughts (Never trust anyone again!!). They were recognitions about what is really important to me, what ways my work (and what I will do – and not do – for money) interweaves with what matters most to my heart.

So appreciate you, Doris. Thanks for volunteering, and thanks for joining the circle, too! I added you to the members-only group, and you should see the new Circle Members category show up for you when you look at topics.

I’ve learned not to loan money to a friend that I’m not prepared to give as a gift and, importantly not to shut down on being a generous person because I was betrayed.

I landed on that wisdom myself. Indeed, while I might loan to a friend, I am more likely to do it on a pay-it-forward agreement gift basis.

Money is such a complicated energy. It seems to have so many fables around it. I do think it benefits from the kind of conscious tending we’d give to something we cared about.

Here are some anonymized comments from the chat during this workshop session:

Any of these resonate / activate you?

Thanks to all who helped co-create this exchange! More please!

Thank you, Rick. I’m going to do what you suggested - write out my story and the detailed emotions. It’s complicated. I think my Dad is the main source of these things and some things came out today when talking to him as I got emotional at his non-sensicleness. That put me in tears. Normally I’m not a person that cries hardly.

It helped to talk to my Mom and my husband afterwards. I want to get those 16 tons or however tons of doodoo off me. I no longer want to be hanging around these tombs. I’m not going to spend the next 40+ years being like how my Dad is and has always been.

Welcome Doris! I, too am going to write my financial story. I have always believed that the act of writing something down gives it strength and new insights.

Thank you, Norene. Glad to be here.

It’s interesting because my financial story seems to have to deal more with my dad than with the actual fallout over a decade ago. I’m actually private blogging it and I’m CAPITALIZING and highlighting the emotions I feel. There is a pattern. And ask Rick has said, it’s much less about the money. Very eye-opening.

Money as a means by my dad to control us. Also, he used it as a means to define one’s self-worth.

If you have enough money, you don’t need anyone - that’s something my dad believes.

I realized from some hard lessons to not LOAN things to other people, because I’ve found most people (minus my family), very rarely give back whatever they loan. And that creates in me anger and resentment from loaning people I trust stuff and then them not following through on their word.

Instead, I choose to give instead of loan. That way, I’m not expecting it back. That is much easier to deal with - gifting. If I’m not ready to gift, then I don’t “loan” or “gift”. Isn’t it sad that people don’t care about their own personal integrity enough, even with small things? But I’ve had to learn to let go of that, too.

My husband comes from Colombia, immigrated from there and became a naturalized citizen 1.5 yrs ago. Though he was a software engineer there, he got paid very poorly. In the U.S., he gets paid decently. He has some friends that have needed money and have asked us for loans. I knew that if they didn’t pay us back, my husband would harbor ill feelings towards his lifelong friends, so even if we had to reign in things for a short bit to help them out, I said we will not loan, rather we would gift them the money.

When you gift, you don’t expect anything back in return (at least we don’t).

Wow, this just revealed some things to me that I need to write in my financial story.

Money is a form of stored energy.

That is quite interesting.

Rick, you actually just opened my eyes to something I’d never seen before. If money is stored energy (potential or kinetic energy). Energy is power - well, actually speaking from a mechanical engineering point of view, energy actually is power times time.

That is quite interesting and I’m loving this perspective.

I used to hear that. Your words point to to something that feels more true. Energy is power times time. How we orient our power, how we employ our time… gives us that E(nergy)-motional experience of life.