I was involved in martial arts for many years…Karate, Aikido and Tai Chi mostly, beginning as a teen. I’m on the mailing list of Tony Blauer who has a very ‘naturalistic’ system of self-defense based on our mammalian nervous system’s ‘flinch response’. I find him to be a very interesting and deep thinker who has a very different mind than most martial artists. I thought this most recent email from him was really relevant to many of the things we consider in our community in regards to emotional freedom…

"I saw this meme and it made me think…

It made me think that self-defense should be holistic and extended beyond the physical realm - it would help us all lead safer, less stressful lives. 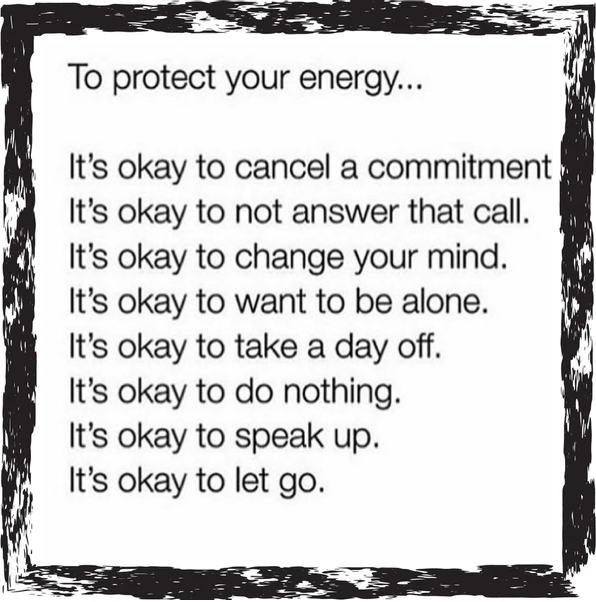 Okay, you read the meme, it doesn’t directly connect to the self-defense we all visualize.

For example, what do you think when you think ‘self-defense’? Do you visualize fists flying, violence, a physical fight?

Most would. After all, self-defense implies to protect.

Self-defense can be spiritual and more holistic.

What if we thought of self-defense as protection, that extends past property, body, or life?

Of course, the most urgent type of self-defense would be for sudden physical violence, but shouldn’t we also learn how to detect, defuse, and defend any threat that would compromise our health, well-being, and emotional and psychological safety?

*And we could/should expand this list to include nutrition, energy, recovery, interpersonal communication, and more.

Here’s a new definition to meditate on:

Self-defense: The ability to protect yourself from any physical, emotional or psychological threat, danger, aggression, or attack. That is holistic self-defense - we would just need to widen the lens on what a real threat is.

The new holistic self-defense would require a different definition for situational awareness, one that included self-awareness at its core.

I think this is pretty cool and much needed.

And here’s a potentially big

Most of us endure emotional violence far more than the physical. The irony is that it appears in the form of shit self-talk. We are both attacker and victim. The attack comes from within - negative thoughts, worrying, self-doubt, fear…

Remember, ‘time’ is the only resource we cannot regenerate - when the attack originates from within, we are essentially mugging ourselves… of confidence, energy, opportunity and our time.

The meme inspired this idea. We all need recovery time. Reread the meme and let’s stop mugging ourselves.

Have a great weekend,

Self-defense: The ability to protect yourself from any physical, emotional or psychological threat, danger, aggression, or attack. That is holistic self-defense - we would just need to widen the lens on what a real threat is.

It would seem emotional freedom includes skills of self-defense, although I feel this flinch in my gut because it seems to be a “thing” to accuse someone of being defensive. Well yeah! Self-defensive when it comes to that which would compromise our well-being probably does need defensiveness!

Defensiveness: it’s become such a loaded word…an accusation to hurl at someone…maybe ‘pop psychology’ is the culprit? Like you it’s a word that causes some internal friction in me…it rubs against my higher spiritual ideals. I should be able to meet any attack (emotional, physical, psychological) with equanimity…calm/confidence…and the idea of being ‘defensive’ doesn’t jive with that!

But I’m also thinking along the lines of how we acknowledge that everything we do, all of our impulses and desires, are imbued with an innate intelligence. Within the context of someone’s unique inner ecosystem defensiveness is probably the exact right response to maintain equilibrium in that moment…and maintain the feeling of certainty. Intellectually we might consider it un-evolved or immature to be defensive but that misses something fundamentally intelligent about it. A change in the ecosystem is what may be needed… then the defensiveness will naturally fall away…no more use for it. I’m speaking of that reactionary and spiteful kind of defensiveness. There can be of course a calm/confident and rational way of defending oneself.

Anyway, I’m in one of those states of mind where I feel like I’m rambling on a bit incoherently…

I followed that I think

As I consider when I have been called defensive, in retrospect it is really CLEAR to me that I was being told things about who I was and what I was thinking/feeling/doing that, well, I do not agree with. Other who I trust to “call me on my shit” also concur that the attacks were mostly from a place of dis-regulation and unmet needs, not from anything I was doing or being that went against my values or integrity.

Well, except for being defensive about it!! Arrrgh.

I’m tonight recalling and recalibrating again. I believe in our right to defend ourselves from physical attack, from someone that wants to TAKE from us something that we’re not giving freely.

Biologically we are wired to defend against attacks. It’s survival 101. But our brains often don’t accurately distinguish between real attacks (with actual measurable negative consequences) and perceived attacks I think. So, I guess that’s where the homework lies…the practice…the recalibrating. If we can diminish the number of ways we feel ‘attacked’ then we will naturally behave defensively far less. I think this describes accurately one of the goals I have for attaining greater emotional freedom…to unhook myself from the perception of being ‘attacked’ when I’m really not.

Nonviolent Communication (NVC) and work like Susan is doing I believe seeks to shift our “habitual” language from one of blaming and trying to force another person to change who they are or how they are behaving so we feel better, to one where we speak from how we’re feeling.

I feel a lot less defensive on the second than the first.

Both are saying you’re angry, but the energy of the latter feels less intense and rather productive and the first one feels disempowering.

In Sanchin Ryu, one of the things of that form of karate is there is no blocking, rather even when you’re attacked by various attackers, the movements has the attack passing through you. You use their momentum to dissipate it, rather than to block it.

As I’m doing the Primitive Brain Program (PBP), I’m loving that I’m learning regardless of the emotions, I can handle it. I don’t have to let it control me, rather acknowledging the emotion and seeing the information I’m giving and how to handle it better (like letting it pass through me with the momentum it came to me).

So reframing is a big thing -

the perception of being ‘attacked’ when I’m really not.

Maybe learning to take things far less personally, even if it is personal. I’m curious as to how that works and how my life would be that I perceived things differently when I feel like I’m being attacked. Of course, I’m not talking about if you’re truly in a violent, dangerous situation I wouldn’t be doing this.

Maybe learning to take things far less personally, even if it is personal. I’m curious as to how that works and how my life would be that I perceived things differently when I feel like I’m being attacked.

I think a fundamental aspect of ‘how that works’ (not taking it personally) begins by understanding that when a person is ‘attacking’ you verbally they are most likely in their primitive brain and aren’t really commenting on ‘you’…the actual you…their words are not really about Doris or Glenn…it’s about whatever you represent to them as a conceptual threat in that moment (since we’re not talking about a real threat). You represent an idea or a past trauma or a belief that they are feeling as a threat and believe they need to defend against and that’s what they are attacking…not you but the perceived threat. So you can easily de-personalize it knowing that… because it’s really not ‘you’ that they are attacking in the first place. It just appears that they are. Now, they probably aren’t aware of that consciously. Another example of a ‘Magical Misconception’ perhaps. You’re just being used as a target because ideas, past traumas and threatening beliefs are invisible and therefore difficult to ‘aim at’ unlike actual people. So I guess the next step is to have the ability to forgive the ‘attacker’ for not understanding their role in how this works. My experience is that not many people understand this dynamic. I’m able to use this understanding a lot of the time but I still can get lured into the misconception that it’s me that’s being attacked more often than I’d like.

We haven’t mentioned “status attacks.” My primitive brain is aware that someone “attacking me” – meaning they are bringing energy that asserts their power to get me to submit, agree with them, run away… that hits my monkey mind as a threat to my status.

I’m wondering whether status threats hit us differently than physical threats of violence or takings.

Watching Monkey Kingdom it was so clear that certain noises, facial expressions, and body postures would be considered status threats… and would result in physical or certainly energetic/emotional response by monkeys more alpha.

That’s all really interesting and a new thing for me to ponder! I haven’t ever really contemplated things much through the lens of ‘status’ but it’s certainly deeply wired in us as primates And as you describe your experience with ‘status attacks’ I can certainly feel what you’re describing. I’m going to pay more attention to this. I’d like to watch the program you mention. Thanks.

Good question. It’s similar to something I’ve been really curious about. What are the differences in physiological/psychological effect between metaphorical attacks and literal attacks? I think we can safely assume there are differences, at the very least on the physical level, but are the differences as wide as I tend to imagine them to be? Perhaps the difference gap narrows over time and the ‘as if’ experience and the ‘real’ experience share more in common symptomatically. In other words the ‘as if’ over time drifts more into the realm of ‘real attack’…???

Agree. You expressed it much better than me. Thank you, Glenn.