When You're A Kid

I was still pretty young when I realized that my parents were just people too. My two brothers, both older than me, still seem to carry grudges and hurts because my parents (my father in particular) didn’t live up to some expectations they still carry…as if our long dead parents are still not living up to those expectations. 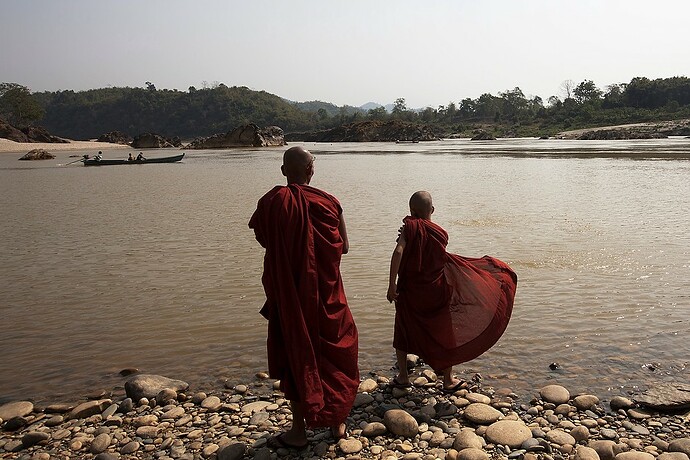 A senior monk and a junior monk were traveling together. At one point, they came to a river with a strong current. As the monks were preparing to cross the river, they saw a very young and beautiful woman also attempting to cross. The young woman asked if they could help her cross to the other side.

The two monks glanced at one another because they had taken vows not to touch a woman.

Then, without a word, the older monk picked up the woman, carried her across the river, placed her gently on the other side, and carried on his journey.

The younger monk couldn’t believe what had just happened. After rejoining his companion, he was speechless, and an hour passed without a word between them.

Two more hours passed, then three, finally the younger monk could contain himself any longer, and blurted out “As monks, we are not permitted a woman, how could you then carry that woman on your shoulders?”

The older monk looked at him and replied, “Brother, I set her down on the other side of the river, why are you still carrying her?”

as if our long dead parents are still not living up to those expectations.

is a classic example of unhealed trauma. It is “living still” in their energy field.

Even though they did not meet my need for ____, for whatever set of reasons and circumstances and inabilities, I honor and respect the pain and trauma… and I accept that I can choose to meet those needs myself now.

My vision is that with more emotionally skilled people around, more kids will get needs met, and more adults will find a wise-heart-listening-loving-accepting to allow others to feel supported in letting their inner children “grow up” and be free.

It’s impactful when parents do not meet our essential, natural needs. When we see and know they are putting their energy elsewhere, it’s really HARD to reconcile and to live with the impact. I believe deep parts of us have to cope / adapt / mal-adapt in response to unmeet essential needs.

Unwinding and recasting those aspects of ourselves is emotionally freeing. It right now is still as weird as a cell phone was in the early 80’s. My hope is that 40 years from now, emotional skills will be… shared generously!

It’s impactful when parents do not meet our essential, natural needs. When we see and know they are putting their energy elsewhere, it’s really HARD to reconcile and to live with the impact. I believe deep parts of us have to cope / adapt / mal-adapt in response to unmeet essential needs.

The interesting thing is how we each (we three brothers) deal with, respond to, think about and speak about the traumatic effects. In a very real sense each of the three of us had different parents and a different family. Naturally, my parents changed individually and as a couple over time and the nature of the family changed from a single child to two and finally three children. And then factor in that each of us kids came into the world with differently wired nervous systems. It doesn’t seem reasonable to even think that we three came from the same family. Similar perhaps but certainly not the same.

I’ve noticed an interesting thing that happens in the aftermath of parenting behaviours that ignored one or more of our needs. We can retreat into the certainty of a sort of hyper-awareness of our parents’ inability to meet those needs or, conversely, we display a lack of awareness. I’m sure those are probably extremes on a spectrum. I seem to have favoured the latter. I can see benefits to each of those ways of dealing with/responding to trauma.

It seems to me that one invites the ‘blame game’ (fight/flight) and the other the ‘shame game’ (freeze)….undoubtedly this is an overstatement but I sense there’s a general accuracy to it. Coming from the ‘shame game’ I have an inclination to wish that I had gone more into anger and blame. Those energies have movement and action and decisiveness and momentum…shit gets done. And it can actually be quite attractive to the casual onlooker…unsettling to be around for too long though. But ‘freeze’ is lonely and often sedentary and directionless…all the energy and spirit is sucked out of it. Now, that doesn’t describe all of my life or my tendencies but it does account for a significant part of it…too much of it it feels like.

My lack of awareness about my parents’ role in my moods and behaviours and general outlook on life wasn’t made apparent to me until I was a young adult. I can’t say that I was in denial. That’s not a fit for me because to my way of thinking in order to deny something you must first be aware of it’s existence which implies that you are conscious of that thing you are denying. I was truly ignorant of the effects of their parenting and of the abnormal aspects of my childhood…even though the evidence was all around me (how some of my friend’s lives were so different for example)…and inside me emotionally. Most of that didn’t come to my conscious attention until MUCH later in life. Prior to that I had ‘normalized’ it…not denied it.

) through some emotional terrain. There’s no life-changing nugget of wisdom I can offer anyone…or myself. Just a moment of curiosity about ‘all of it’.