What Monkeys Can Teach Humans about Resilience after Disaster

What Monkeys Can Teach Humans about Resilience after Disaster

Following Hurricane Maria, a Puerto Rican colony of rhesus macaques broadened their social networks. Could humans do the same post-COVID? 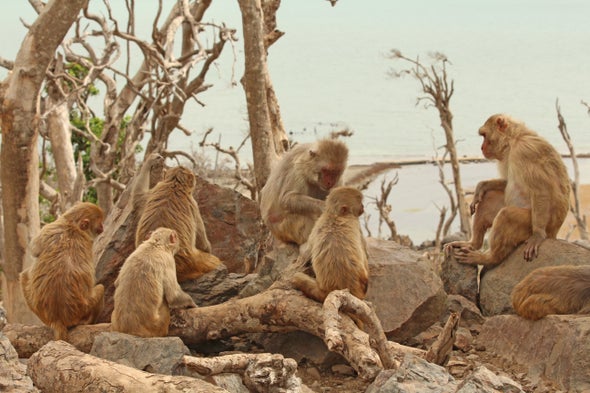 In September 2017, when Hurricane Maria hit Puerto Rico, the storm first made landfall on a small island off the main island’s eastern coast called Cayo Santiago. At the time, the fate of Cayo Santiago and its inhabitants was barely a footnote in the dramatic story of Maria, which became Puerto Rico’s worst natural disaster, killing 3,000 people and disrupting normal life for months.

But more than three years on, the unfolding recovery on the tiny island has something interesting to tell us about the critical role of social connections in fostering resilience. Santiago is home to some 1,500 rhesus macaques who have been closely observed by scientists for decades. To everyone’s surprise, nearly all the monkeys survived the storm. That made their response to the devastation of Maria, which wiped out 60 percent of the island’s vegetation, an unusual natural experiment. How would they cope? How would the competition for resources—food and shade—play out? Scientists also wondered whether the trauma of having experienced the storm might make the animals strengthen their existing bonds. Would they solely rely on their closest friends, as many humans have had to do during the COVID-19 pandemic?

The monkeys reacted by changing their social order, it turned out. The macaques built broader and more tolerant social networks, according to a paper published today in Current Biology . “It’s a wholesale shift in the level of connectedness across the population,” says neuroscientist Michael Platt of the University of Pennsylvania, who is co-senior author of the study.

The new paper “expertly addresses a deep and fundamental question” of how a social organization of primates (a category that of course includes humans) might rewire itself in the face of a threat, says physician and sociologist Nicholas Christakis of Yale University, who studies social networks and wasn’t involved in the research. “Can external stress in the form of natural disasters make our societies stronger if they do not wipe them out? This work shows that the answer is yes—or at least that social order is adaptive.” 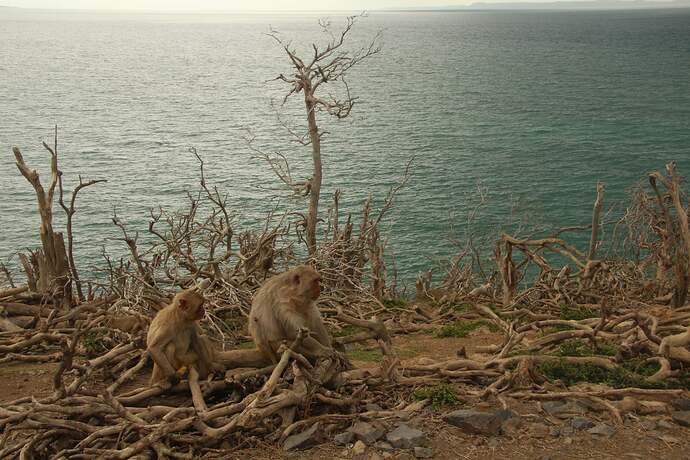 Mother and her juvenile on Cayo Santiago after the storm. They are seen on a part of the island where all of the vegetation had died. Credit: Lauren Brent

For 10 years, Platt and his colleagues have been working on Cayo Santiago with their partners at the University of Puerto Rico’s Caribbean Primate Research Center. They are just the most recent in a long line of scientists doing research on the island since the rhesus macaque colony was founded in 1938. The animals there are all descendants of an original group brought from India, and they are semi-wild: they face no predators and are fed once a day because, even before Maria, there has not been enough food on Santiago to sustain them. But their social interactions are otherwise entirely natural. That allows scientists to carefully track who does what to whom and who else is nearby at the time. These observations have added substantially to what we know about the evolution of social behavior and friendship.

After the storm, the observers noticed that the monkeys seemed less aggressive. Were they really more tolerant of one another? To find out, the new paper compares two behaviors—proximity and grooming—during the three years before the storm and for one year afterward. Proximity, a form of social tolerance, is simply a measure of who sits next to whom. Grooming, a more active form of bonding, serves as a valuable social currency for rhesus macaques.

The team hypothesized that the monkeys would intensify existing bonds, but that is not what happened. “We see this massive surge in the time they spend in proximity to other partners, and their social tolerance increasing toward many different partners,” says Camille Testard, lead author of the paper and a third-year graduate student in neuroscience at Platt’s lab at the University of Pennsylvania. “We saw active building of relationships with individuals that they didn’t really interact with before.”

The biggest changes were seen in the animals who had been least sociable before. Grooming requires time and energy, Platt says. Presumably, the effort of building relationships had not seemed worth it for those animals before or was too stressful at that time, but the storm “really put the pressure on,” Testard says.

That pressure probably came largely from the need for shade, which had become a limited resource. After losing so many trees, the island was, on average, eight degrees Celsius hotter. “What types of social relationships are going to be most helpful if what you need is relief from the Caribbean sun?” says behavioral ecologist Lauren Brent of the University of Exeter in England, who was co-senior author of the research on Santiago with Platt. “The best solution might be to branch out, make some new connections, make sure you’ve always got some shade available.” She likens the strategy to walking into a crowded bar and trying to find a seat at a table: the more people you know, the more likely you are to be able to sit down.

For the macaques, flexible social lives became a coping mechanism. “When [the animals’] needs change, they are able to quickly change their social networks to help them negotiate new challenges they face,” Brent says. Furthermore, the macaques’ behavior added to evidence that different types of social relationships serve different functions and that what works in one situation might not be optimal in another. “It’s reasonable to assume these things are true in humans as well,” Brent says. “Our social relationships change across our lives and when we find ourselves in new situations. And these changes can help us to overcome a large number of problems.”

When humans face natural disasters, we often behave as the macaques did, coming together as a community and reaching out to help strangers. Unfortunately, those instincts have largely been thwarted by the social distancing restrictions necessitated by COVID-19. “That’s why we see these skyrocketing incidences of mental health issues,” Platt says. “There’s a need to connect to people when you’re feeling stress, when there’s uncertainty in the environment. And now you’re unable to do it.” Instead, during COVID, we have had to do the opposite of what the monkeys did. There has been a shrinking of our social circles, and we have relied heavily on those closest to us. This, too, however, reflects social flexibility dictated by circumstances.

It is no wonder that stress and resilience are on our mind. And it is likely that the macaques of Cayo Santiago have more to reveal about the effects of the former and the roots of the latter. This paper is only the team’s first study on the macaques in the aftermath of Maria. “It’s going to be really exciting, as we dig into all of this biological data that we have,” Platt says. “We’re going to be able to learn things from these monkeys that we have not been able to learn from humans or from any other animal.”

Yes, one of our challenges is that while the monkeys are clear that their survival is at stake, because their physical needs are telling them so, the pandemic said that our survival required DISTANCING rather than coming together.

Rather than tending to those in need, we isolated them.

Rather than do this for 40 days, literally a quarantine, we isolated everyone for months.

NOW, the cost to the emotional world has been so stark – to me with the eyes and heart of an emotional world environmentalist. We do need to touch, help each other, and yet so much fear remains even amongst the vaccinated and recovered.

I can’t say I know what to “do.” Sometimes environmentalists see the devastation and just, well, cry out for support.

Yes, the isolation and it’s emotional effects are key to our current situation. It would be more like the macaques, after surviving the hurricane, were then put into cages, separating them into one or two or three per cage and not allowed to have social contact. It’s as predictable as a mathematical formula that depression and anxiety will be the result.

And as you suggest it’s also predictable that these emotional effects will continue long past the end of the pandemic. As I’ve suggested previously it’s the ‘thought virus’ of fear that will be the long term effect of this.

True, @Glenn. I’m glad we’re not sitting on our thumbs and are adding at least options for connection and engagement, seeing and being seen. Heart touched even across the continents.