The Evolution of Work 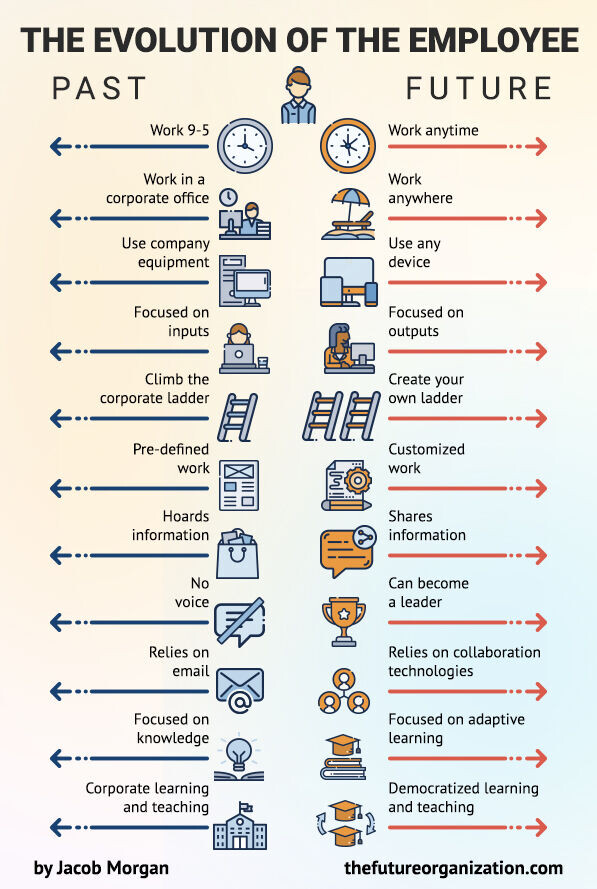 I would not label this as “Employee” although I understand that is still the paradigm. One of the reasons I believe Emotional Freedom for All is so crucial is that we’re in the starting decades of what historically would be considered a “500 Year Transition.”

All these aspects in the diagram are at work, NOW. Some jobs and some people will be more affected by these things near term than others, and…

The opportunities for crafting a Thriving Lifestyle have never been so… possible. Available. Supported by the technologies of our age, including emotional technologies and Real Skills.

I’m excited to be in this with YOU!

The (r)evolution will not be televised…

Yes, I can see this happening already for sure. Of course there will always be those jobs that cannot make this shift. It’s hard to work in a coal mine from home or police the neighbourhood in your undies from the kitchen table…

. But, those sorts of jobs will undoubtedly change as well and technology will alter them in some fashion.

There are many systems where a hierarchy of power/status is a necessary facet and complete democratization just isn’t workable or useful. Policing would be an obvious example. It would be an impediment to it’s functioning. So, this model wouldn’t suit that sort of system I don’t think.

But for the probably the majority of jobs in the workforce the model in the diagram would work wonderfully and would be an evolution for sure.

I like that you consider this stuff Rick because, as I’ve said before, this isn’t usually on my radar so it’s a challenge for me to parse these sorts of ideas.

It’s hard to work in a coal mine from home

I saw a machine that did coal mining. The entire machine used AI to follow the coal seam, snaking its way underground – no humans were underground. The ENTIRE MINE had 14 employees at work when operating.

It was calculated that in 1970 the same mine – for the amount of coal it produced from the same location – would have required 10,000 workers.

Policing… a lot of policing is traffic control and other types of observation. While I have grave concerns about the surveillance state, the notion that there will be a police officer pulling over a human driver 15 years from now for a non-criminal violation would be really surprising to me.

Of course, I am often surprised by timelines. The trends, though, are following the exponential curves of technology adoption – curves whose timelines are accellerating.

Interesting stuff Rick! And I think you’re right in your overall assessment.

Some of it doesn’t feel very friendly to me I have to say (old man ‘get off my lawn’ syndrome no doubt in some part) despite the apparent benefits outlined. Like any major transition there will be important questions to be asked…perhaps the most important is “who will this benefit ultimately?” It seems like a bright new future on the surface but as we know from a cursory perusal of history there are always forces that will shape to their benefit how this overall idea should look and how it will play out. So how do we safeguard against this idea, this transition, from being ‘captured’ and shaped for ulterior motives that don’t respect the original intention? Some will simply seek to capitalize and profit monetarily and others will likely be more nefarious than that. Again, history (past and presently occurring) shows us that this is a given. It would not be appropriate to think that a structural evolution is necessarily coincident with an ethical, moral or emotional evolution and I know you know that. So, what do these new dangers look like? How will we recognize them? It would serve us to not go into these changes with nothing but naïve optimism.

I am reading the book The Sovereign Individual right now. Although written 20 years ago, what I see having been played out and what is rising now is consistent with their historical viewpoint.

I’d like to think that will change. Or, more accurately, it WILL change, and it isn’t clear at all what will emerge. Dystopian or really significant improvement. We’ll see.

I do believe that IF more of us are working from non-primitive brain, the likelihood of more compassionate solutions that also are engineered to provide freedom of expression, contribution, and heartistry have a better chance than if it is just the current batch of psychopaths in charge. (In general nation-state politics and mega-corporations and high finance are successful hunting grounds for intraspecies predators – psychopaths).

I will look into getting that book you’re reading…thank you. I mentioned a book the other day during a Tapping Circle. It’s written by a married couple who are PhD Evolutionary Biologists. The book is ‘A Hunter-Gather’s Guide To the 21st Century’.

I can’t recommend highly enough checking out their DarkHorse Podcast. It’s absolutely brilliant. They discuss a wide range of topics and answer questions posed by their viewers. It’s how they discuss these things…the clarity and finesse with which they do it…and at times they disagree with each other in such a wonderful and exemplary way. And they seldom arrive at a ‘hard conclusion’. They aren’t on anyone’s payroll, which is important to my mind. For most people in less than a minute you will see clearly the quality of their character, their honesty and their immense knowledge and experience that allows them to analyze data that most of us aren’t qualified to do. They are driven by ideas rather than ideology and that is a rare find these days. The whole thing is a lesson in critical thinking and emotional freedom in my opinion. It’s the best thing I’ve found online. And they discuss many of the things we are today.

Thank you. I’ll pick up their book when it is out on Kindle next week.

I listened to a couple of their snippet segments, appreciating their nature to consider different aspects of the ecosystem we share, to bring that kind of earthy sensibility that isn’t a surprise with biologists, right?

They talked in one about the exhausted middle, the vast majority of people who have more flex and multidimensional awareness about most things. And we’re exhausted by the fighting and segmenting…

I have so much respect for their character and their minds. I wish there were more people that had their ability for critical thinking rather than reactive posturing. I learn so much from them. Not just factual, data based things but more importantly they elegantly demonstrate how to think and how to think about thinking (rather than ‘what’ to think). Some time ago I realized that I am much more interested in aligning myself with good ideas (regardless of where they ‘sit’ on a spectrum of left/right etc.) as opposed to aligning with an ideology which only inspires defensiveness at the expense of intellectual honesty and they epitomize that for me. I’m pleased that you found them interesting…I thought you might.

My kind of teachers…

I didn’t read the comments on their videos. I imagine there are challenges being in their roles right now, with the topics they choose to cover and explore. The Middle Way people I know are, these days, getting anti-thoughtfulness flak from many sides. I’m grateful that some of them are emotionally calm and confident and prepared enough to keep teaching and exploring anyway.

For me this morning, I feel this desire in my heart that it was more “profitable” to promote well-being than to address (and trigger) people’s feelings of suffering.

A topic like “How to lose weight fast!!!” sells 10-100x more than “how to let the beauty around you actually nourish your thriving.” We’re so focused on our emotional pains, shame, and fears, it makes people really susceptible to tribal manipulation and coercion.

Indeed, my own pain from the world being so loud activates some of my own tribalist frames of reference.

Going to go pet a mushroom I think… A simple uplift or two would be good for me right now.

Going to go pet a mushroom I think…

I love earthworms!!..I’ve always had an attraction to them and what they represent to me…I think mushrooms may have a similar pull for me which I hadn’t considered before. So, if you can’t locate a mushroom that consents to being petted perhaps you can locate a congenial earthworm…I think you will get the same desired result.

It’s a very obvious thing to me that there are forces at work in our world that benefit from keeping us in the weeds, overwhelmed with small detail…it serves us to remember that ‘the devil is in the details’…that’s where his/her work is most easily accomplished it would seem…and it seems to me that’s a huge aspect of the various conflicts we have today both at the ‘macro’ societal level and the ‘micro’ level between individuals and the even more ‘micro’ inner life of a single individual.

I’ve read quite a few comments on The DarkHorse Podcast page and they are overwhelmingly positive. Many, many people appear starved for this sort of intelligent discussion. It’s a missing nutrient from our emotional diet which is very scarce in the buffet of words that’s offered by mainstream conversation.

Hey Glenn and Rick – I’ve read these posts with interest and am going to check out the DarkHorse Podcast because, you’re absolutely right that :

many people appear starved for this sort of intelligent discussion.