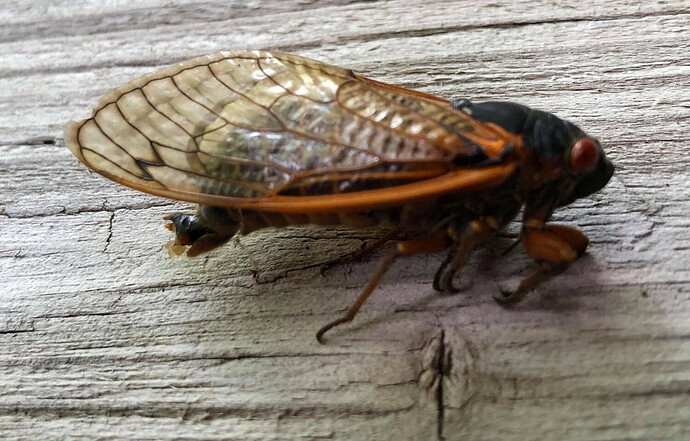 "It is the end of the line for this lovely lady.

She spent 17 years buried deep in the dark safety of the earth doing nothing but eating and growing among a vast network of roots and tunnels in a world totally unknowable to humans.

Then, shit got real, as they say. Something told her to go towards the light. A complete unknown and utterly foreign world waited for her.

She dug and she climbed (to where she did not know) but her body compelled her to do so and would allow for nothing else, so she carried on and on.

I cannot imagine what it must have felt to see her first glimpse of sunshine after 17 years of life in total darkness. It is an idea so foreign and so remarkable it boggles my mind-as I’m sure it did hers.

What her last days were, I would like to imagine, involved utter hedonism for which these remarkable beings are famous.

Lots of song and dance and sex and flight.

Flight! Can you imagine being able to fly after being buried under thousands of pounds of earth and pressure for 17 years?!?!

There are no adequate words to explain the remarkable life cycle of these creatures.

Her final curtain call, after the last act of ensuring the survival of her species, was serving as nourishment for thousands of tiny ants which came pouring forth from her body as I moved her. They returned her to the soil and the earth, through their own endless networks of tunnels in the darkness. She returned home.

I feel terrible for the humans who cannot understand or see the miracle of not just these insects but the entire, vast, glorious web of nature and its biology, its morphology. Those in concrete jungles, either by force or their own design. They miss all this. The miracle. One out of an infinity."