Put It Somewhere Else

I’m feeling my way around this and mostly it’s a good, warm feeling… 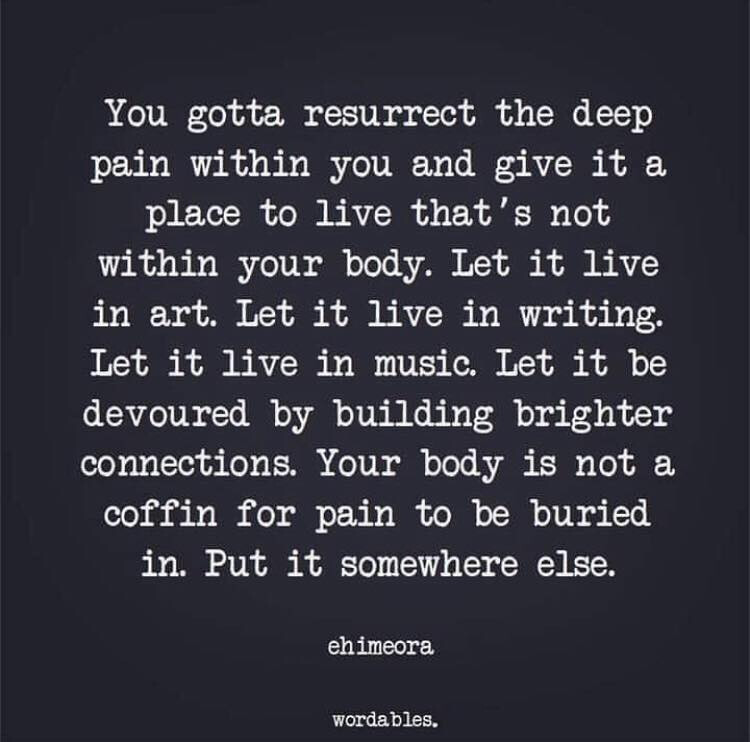 I could feel pain live in the music echoing out from my piano the other day… so much better than it living in the center of my chest. Thanks for the reminder.

As I think about this a bit more it’s become clear that this is probably a hard-wired ‘reflex’ in humans…to externalize pain. Unfortunately it seems to be a very common reflex for many people to attempt to put the pain on another person as a way to externalize it.

From here on in I’m just thinking out loud…unpacking this idea a bit further:

Looking through the lens of evolutionary biology I’m guessing that all pain is perceived initially as having an external source…a bite, a sting, a punch, a sharp branch, a thorn, an arrow, etc. As a survival mechanism this hardwiring makes sense…even emotional pain is felt as physical hurt (we perceive emotional pain in our bodies) and the instinct is to put the source of it on some external threat…thus is born ‘blame’. We aren’t that many minutes beyond our species being hunter-gatherers…we are truly only a few minutes into a collective, ‘civilized’ way of living so we still live with our ancestral survival reflexes and instincts in many ways.

The mechanics of it probably go something like this : If I hurt (physically/emotionally) I look for the cause of my hurt outside of myself because a threat from outside is far more dangerous (and far more likely) than one from inside…so I look first to place the source of my pain outside myself…at least as an initial response.

This, for me, adequately explains why so many of us so often look to blame others as the source of our emotional suffering (which is felt physically) and why it’s often so difficult to turn our attention inward for the source…and of course when we do we often just ‘blame’ ourselves…and why it’s so common for people to feel victimized by someone/something in situations where clearly they are not. It seems to me what we call ‘blame’ is a response rooted in our ancestral survival inheritance…‘blame’ is the behaviour of looking for the source of our potential physical demise (the thing that caused my hurt) so we can stop it and thus survive. ‘Blame’ is not a psychological aberrant phenomenon (as it’s treated within our modern tendency to psychologize everything)… it’s a biological response whose function is to insure our survival. The great thing is that we can learn to re-wire our hardwired reactions and put the source of our pain where it appropriately belongs…sometimes internally, sometimes externally. Assessing the source of our hurt correctly seems very important to me for survival and Thrival.

That’s how I unpack it in this moment anyway… 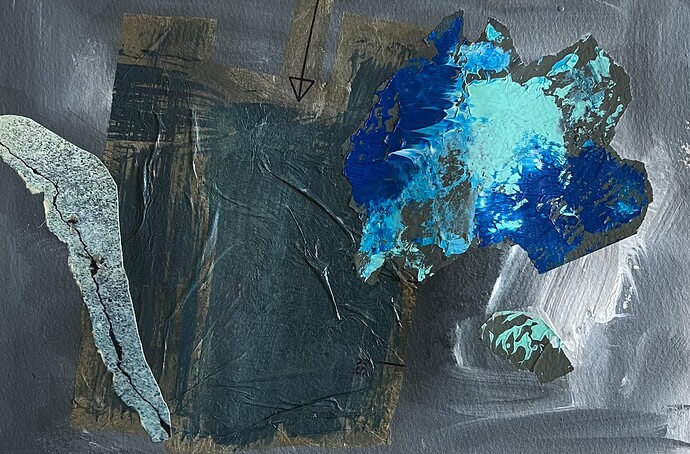 I put my pain in pictures I take sometimes. 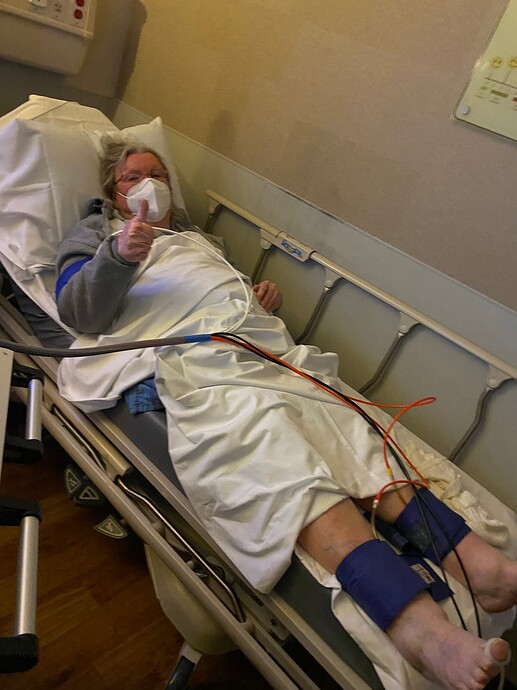 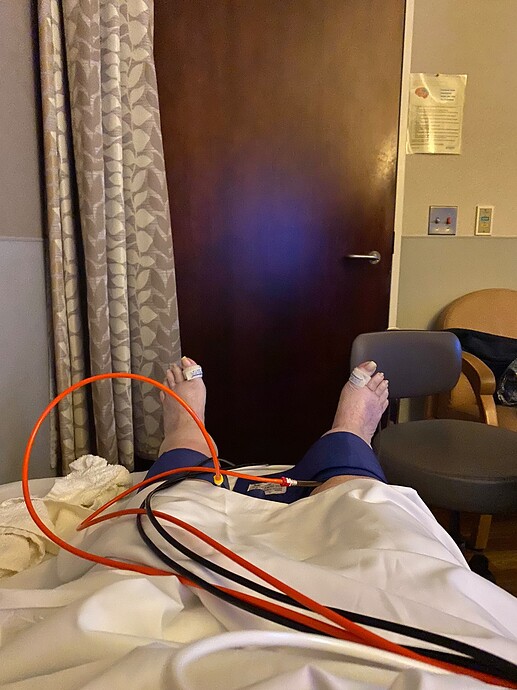 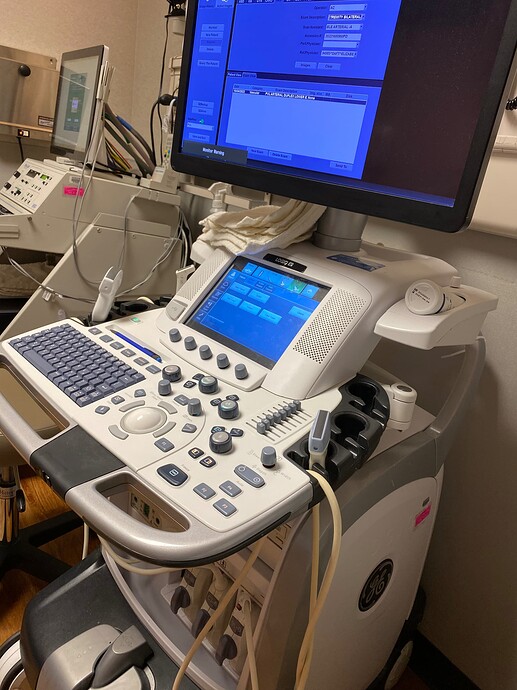 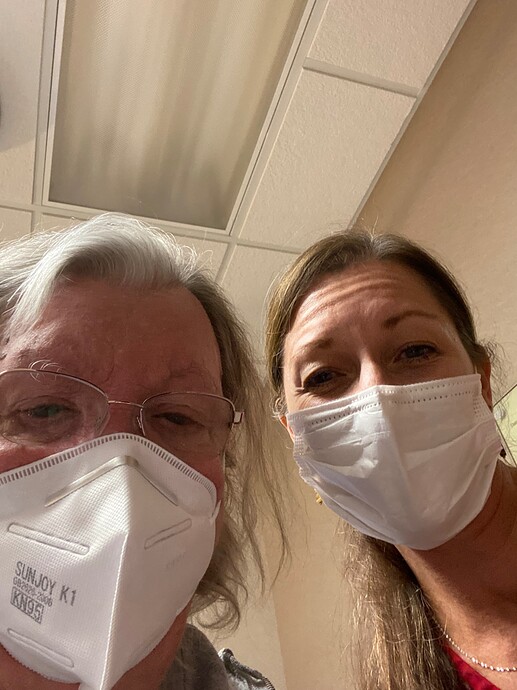 Is that you?!! Are you able to give us a bit of description if possible…and if you’re comfortable with that?

Yes that is me last week. I had an ultrasound on my legs. My doctor ordered it for me last December and I was so terrified of feeling trapped that not only did I have a problem scheduling it but I cancelled twice. The third time was a charm. It was easy, the lady who did it was so nice. She said everything looked good but of course the Dr had to read it. But here’s the kicker. She said just so you know, if it had not read well we would not have let you out

I am so glad I didn’t know that because I’’d problably never have gone. Everything is ok and I am SO GLAD ITS BEHIND ME. Did you see the little blood pressure cuffs on my big toes? I had to LOL abut that. Thanks for asking.
P.S. She never heard of tapping and I taught her.

She said just so you know, if it had not read well we would not have let you out

“Oh you sweet innocent child… I bet you think you could tame the dragon, too. Best to stand back and not get scorched than ever try to keep me caged…”