Let There Be Music! 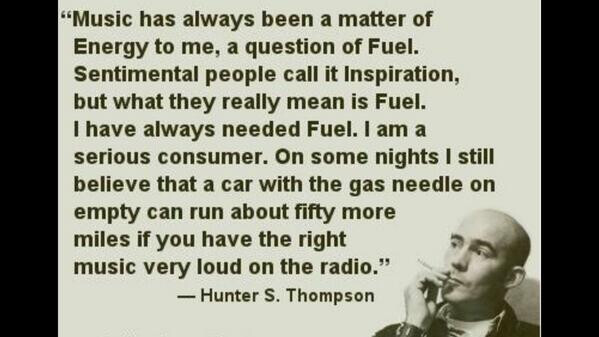 Music is definitely fuel for me. Sometimes it is JUST the fuel I most benefit from to change my vibe.

I sense it is time to change the string on my guitar! Happy New Year!

That’s great referring to music as Fuel. I loved putting on loud pumping base pounding music and dancing. I agree it is more than inspiration it’s FUEL. “Check out Guitar George… he knows all the chords”

I’d never seen them on video! Not what I pictured, and sounds so good.

Hunter S. Thompson!!! Now there’s a flash to the past!!

“I have always needed Fuel (Inspiration). I am a serious consumer.” His mind is unique!

Who is George? Or is that a metaphor?

“Check out Guitar George… he knows all the chords”

It’s a line in the song lyrics of Sultans of Swing. My favorite line.

I checked out Guitar George ~ he wasn’t quite what I expected either but I listened / watched for several minutes (mostly because I loved his accent!) and learned more about chords than I did when I explored learning the guitar when I was a kid!

Ah Guitar George! I didn’t know the lyrics. I just liked the song/beat.