I want it, I desire it, i need it, it matters to me right now!

A pretty long one, but here goes!

As some of you might know, I’m crazy about guitars, but I still can’t wrap my head around what I want, what I need and what I desire. And sometimes, it does feel like I’m somewhat a little “out of control” in my hunt for the guitar that truly “matters to me”.

Am I clouded by my own selfish desires? Am I simply following my passion? Or am I going to face the music of relentlessly spending money buying guitars that serves no value in my life?

I’ve recently bought a fender telecaster, sold it to a second hand shop, and lost a couple hundred dollars. That stings, a lot, especially when I lost that much money in that short span of time, and not utilizing that guitar much at all (it was only a few days of trying out and I’m like, nope, this ain’t gonna work…!) Well, at the very least, I’m sure of what I really don’t want. Much like Thomas Edison, if I’m gonna buy 1,000 guitars that failed, i hope that i can reframe it to start seeing that I am starting to find the “1” guitar eventually, based on the 1,000 guitars that didn’t work for me.

So what if it looks good? So what if it was made from a reputable japan brand? so what if it had great pickups and electronics? I mean yes, they all do matter, but it doesn’t matter how great of a quality they all are if it doesn’t speak to you, if it doesn’t sing the song you want it to sing. Because of this preconceived notion that better quality = better guitars, I’ve avoided fender like a plague. Back when I was still new to guitars, I learnt about G&L, read tons of reviews, watched tons of videos and concluded within myself that G&L MUST BE BETTER than fender. (For those who don’t know G&L and fender, they’re both guitar brand companies, with fender being probably the most popular one, and G&L is kind of the successor of it. But it did not get the popularity that fender did, so it is kind of just more unsung, and unheard of.) And so… I bought a G&L Tribute Comanche, and mann… that was a painful guitar to deal with…! While it isn’t all that bad (there were still many plus points with decent playability), I started to encounter many QC issues, such as fret buzz all over, a heavy guitar, fretting out of bent notes, nut width issues, and a tight af truss rod. It just left me rather frustrated trying to fix those problems that I eventually had to sell it.

I digressed, but was it a mistake? Logically, no. I learnt a lot, and same goes for the heavy fender telecaster I bought. I know what I don’t like now. I hate fret buzz that comes from the amp, dead notes are unacceptable, heavy guitars can become a dread to lug around. And modern pickups aren’t necessary the best. And QC was important.

And fender? mann was i horribly wrong about them. I was just trying a Fender American Performer Strat and Telecaster last week and I was insanely blown away by how good they feel on my fingers. And with the jumbo frets, it made everything so silky and smooth! The Yosemite pickups were glorious as well, it’s like nothing that I’ve ever quite heard before. Single coils sounded so breathable and present, and overdriven tone sounds immaculately resonant! It broke my expectations that fender guitars were just always a step lower than the other more creative and “advanced” brands like Music Man, SUHR, G&L, and even Japanese brands like Fujigen, ESP and Edwards. I don’t discount the innovations and quality that comes from all these other brands, but I really had a Magical Misconception over fender!

Sure, maybe I’m paying for the brand on the guitar headstock, and sure it’s a little overpriced. But I don’t care, if it feels good, it IS good. I don’t care if there are no locking tuners, or maybe the heel joint is just a block, or there are no locking tuners. If I like it, then I want it, I need it to value add in my life, it matters to me to enjoy the music that I want to play, and be proud of the tool that I would have to express myself in my fullest potential.

Maybe I’m wrong, and maybe my opinions would change again, but oh well, that’s just life isn’t it? But right now, I just can’t quite stop with this. I just keep going, keep finding and keep researching until I can find the “one” that will serve me at its best, within my budget that is… But I don’t know, still so much trauma around financial choices… ugh!.. 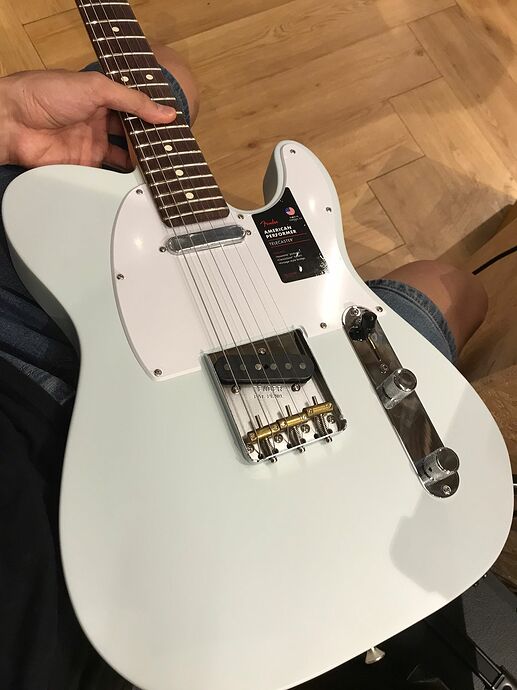 buying guitars that serves no value in my life?

You’re a musician. Music, playing it, writing it, sharing it… MATTERS to you.

There are significant investments we’ll make in our lives. We pay for them with our life – the hours we work to make the money, and even more importantly in my mind, the hours we spend WITH it.

In instrument is something we TOUCH. Something that expresses aspects of ourselves. That translates our life force energy into vibrations others can hear and experience, too.

I have “only” two guitars. The first is a Martin acoustic, and while I tried a whole bunch of others, I needed one that made me tingle with YES when I heard it played well (by someone else) and felt it resonate within me in the way I wanted when I played it. I love that the wood is from Africa - sapele.

Interestingly, I have also handled and played at least 5 others of the exact model… none were “mine.” Isn’t that weird? I’ve tried others that I really liked, some I loved the look of, and none speak to me the same way she does.

Does everyone understand this? Uhhh, no.

Some people like me tend to hate high end cars for the most part. I’ve never been in a Mercedes I liked. My Mazda is the only Mazda I’ve ever been in that I liked. Most think Korean Kia’s are not “high quality” yet I’ve had three different ones now, and loved them all, too.

I do believe that we can look for vendors that will allow us to try out and get to know what we want, to help us refine our YES.

You describe your journey in a way that sounds so much like how people describe finding a house or… life partner. When we understand and ALLOW ourselves to have our preferences refined step by step, and perhaps take smaller steps like trying and coming back instead of buying and returning at a loss, we’re giving the Universe a chance to get to know… what matters to you? What sings to you?

Compared to a lot of educational classes these days, a couple hundred dollars is… worth it… especially if it reminds us to pause, to allow for that YES feeling to arise without pressure, to even take some space to feel how it feels from a distance overnight.

Exactly, I think every purchase of guitar, they have served their purpose to develop me into who I am today. But for looking back, I don’t think I’ll be all that happy with playing the first cheap guitar I’ve ever had, it has values back then, and maybe now as well, but it no longer matters to me anymore. Because I’ve grown to love music in a way that demands for greater levels of expression and appreciation!

the hours we spend WITH it.

Does everyone understand this? Uhhh, no.

Haha, I really do understand this! It’s sooo personal and subjective!! Certainly not everything that’s expensive worked for us! When I try high end guitars, I can definitely feel the quality and the craftsmanship in it, but I either can’t appreciate it at this very juncture, or it’s just not the guitar that I want to make music out of anyways!

understand and ALLOW ourselves to have our preferences refined step by step, and perhaps take smaller steps like trying and coming back instead of buying and returning at a loss, we’re giving the Universe a chance to get to know… what matters to you? What sings to you?

When I first saw this, I struggled. I need that freedom to choose and buy whatever catches my eye immediately, and feels right at the first instance! But you’re probably right, pausing is so hard…! Especially when guitars go off the shelves so quickly. And I competing with other buyers to get that guitar before they do

but the best way is indeed to pause. I went back to the shop today to try that very same guitar, but I don’t feel as “attached” to it anymore. The guitar still feels great, but the safe exit of leaving, thinking again, leaving and being sure to buy is indeed so important. Far better to lose out on a guitar purchase, than to buy something that doesn’t work and put it not to good use in the end. Maybe the universe might offer me something better when I wait. I sure need to work on this!

Especially when guitars go off the shelves so quickly.

FOMO - Fear of Missing Out.

Our new neighbor across the street bought the house without having been inside it… or being aware that when she walks her dog she’ll be scaling Big Hills in all directions! She doesn’t seem… happy. Call it fret buzz.

I have an inexpensive keyboard. When my daughter bangs on it, I don’t freak out because, well, it is the right tool for showing her over time about gentleness. Same with the carbon fiber guitar. I believe that within a price range that is suitable for us, there’s likely a match that feels… ours. Special to us. My first guitar, Martin, costs $700. I did play other Martins that cost 3x, 5x, and 10x. None of them made me tingle the way mine did.

I don’t now. I have just noticed in my life that if I give the universe a chance to really feel my preferences, something surprising can come my way – at a value price. Value price meaning fair and balanced for me and the seller. I do not need luxury goods.

I have a friend who plays the violin. Her violin is, I believe, about $12,000. She’s good enough to have played ones that cost over $100,000 – and honestly she could justify it and find a patron to even get it. She said it’s “hers” and she loves the way it feels, sounds, and responds to her.

I know another man who loves so many different guitars he launched his own store out of his home, with a special place where the guitars are kept climate controlled. He gets to play them, be with people as they try them (as long or as many times as they need), and find them new homes all over the world. Amazing, eh? So he has hundreds of guitars I believe over the course of a year. So that’s always an option, too!