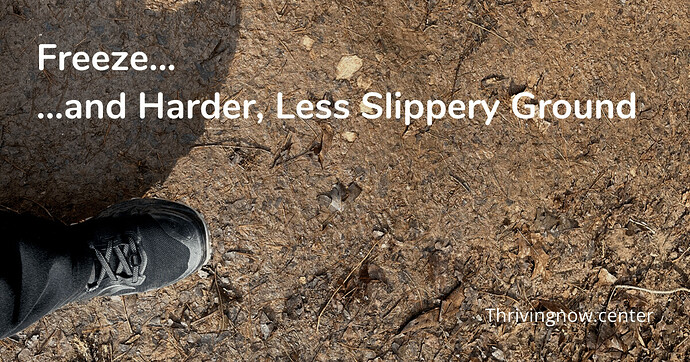 Of the reactions of the primitive brain, the freeze is impactful. A freeze response left un-warmed leads to coping – often in ways that are also hard on us.

So it was interesting as I walked a path this morning that had frozen hard overnight how much harder the ground was than previously when it had been water-logged and mud raw.

It was also much less slippery when frozen than it was bare and muddy.

As I tread on it, I didn’t leave much of a mark, either… so different from the deep marks I left on the same trail when it wasn’t frozen.

I dislike that my body has at times frozen. Hated not saying no out loud when my body was screaming it.

This morning, though, I am really bowing in honor of the intelligence in the freeze.

When I froze during trauma, I am realizing that it gave me a weird kind of “solidness.” Instead of sliding into the abyss, I kept enough traction to get on with my life… and eventually conditions changed – warmed and became welcoming enough – for the freeze to thaw and my body-mind to heal.

…to be able to ‘slide’ into a new way of being.

Yeah, the “and my mind-body” to heal involved thawing, slippery-ness, even fever fires. Unfreezing is an interesting process.